If I purchase Polus and Mira will my friends be able to play them if i host a private online match or do they also need to buy the maps?

Only the host needs the map so others can play with hi.If there are more people with polus or mira map and the host disconnects one of them will be the new host.When all members with the map leave the room will be erased

it is so so so so bad that i play for hours with someone and i start to like him then i disconnect and i leave and that's it. you know it, no one loves playing with someone in a server  for hours then not connecting with him again please add the ability to send frend requests, you even censord people asking for others insta

See, The game updated and now I cant play with others, how do I update???

One suggestion though, you guys should make the PC version free and add the accessories as a paid DLC (namely, all hats, pets, skins, whatever, i dont even know)

Thanks! Keep up the good work!

The PC version is free

Free version without hats.For both android and windows

That a Google Play link, it only works for android devices, do we need an android emulator or something to play on windows?

If I bought maps on my phone, how do I transfer the content over if I switched phones?

Thanks (: should've thought it through :/

I payed money even though i could of got this version? B R U H

the windows version is still 5$ here

Will this game ever come out for console cause I’m interested in buying it for Xbox?

It says the game is free, but the only free version is for Android. Excuse me, wtf!

THE 5 DOLLARS VERSION IS SPECIAL,THERE´S ALSO A FREE VERSION FOR WINDOWS,LOOK AT THE LINK

I posted it but it appeered,i will post it again

Reply
OOF ur memes31 days ago

why cant i buy pets, i want pet

You have to get Among Us on Steam, but you can email ... i think its "us@innersloth.com " to request a steam key for the game, that way you don't have to re buy the base game if you've done so already

Reply
OOF ur memes31 days ago

I have a warn Innersloth, the hackers come back again, now using a program for hack, no a modified Assembly Csharp

this is fake this is not for computer

yeah... perhaps the host of the game's vote could count as double or triple for those trolls and AFKers. but on a side note! just thought of something! just an idea for a holloween themed map with a unique ... function? idk, it would probably be something like a graveyard but... the unique thing being that ghosts can do extra things uwu, something like lighting up lanterns to warn or guide the crew, or illuminate pathways! but i know that would be a lot of work, just an idea UwU~

My friends and I thought of playing hide and seek. It was fun but it would have been better if we actually had places to hide. Can u create  a mode for hide and seek.

I played it too.And it ai best on Polus cuz there you can run around everything with no real hallways.I agree with the idea for the mode.

It would be good if you introduced a system to detect AFK players and kick them, because several times it gets in the way, because we have to wait for the voting time to come to an end because of a person who is not in the game

Hey! I tried opening the game but it opens only for a few seconds then closes. I need help because I really wanna play the game.

I'm having this issue as well. Running in Administrator Mode does nothing.

You can just redownload on itch to get the update. I think itch launcher even updates automatically. If you want the maps, email us with your email (so we can confirm your purchase) and we'll send you a steam key.

Its great, but i think it would be cool if there was a friend request button.

no no no! if that existed then i wouldnt have a chance to plug my social medias so people can add me and we can plan games! UwU, this is a joke that would be great~ but thats not as simple of a thing to implement as most would assume

Fun game but recently constantly get disconnected and doesn't matter what I try to do to fix it.

I also had this ussie some months ago,don´t play for some time and it will get fixed,at least on mobile

I have a question is Among Us ever going to be in console??

Not a bad idea

I am with it

Reply
dogo the dino71 days ago

just downloaded on steam...  game will not launch. ..?

antivirus is disabled for 1 hr but still does not run...

Your pc is not working

That's because you're trying to download the Android version. To get Windows version you should pay $5 ;)

The Fact that I can't put swear words in my username. But does this mean it's family friendly?

I can't update mine Among Us!

quick question, with the windows copy, it's possible to play with people with the steam copy, right?

Probably... In the Android version, for example, I've seen people playing normally with a copy of the game (with a different package than the original)

if i may suggest something...

2. maybe (and just maybe) some kind of leaving penalty :s i know... its also game for mobiles so people can for example play in situations when they dont have a lot of time or something but lets be honest they should just pick better time to play instead of leaving team... people leave a lot mostly when they get killed or caught as impostor or didnt get role they wanted (i mean leaving 2secs after start so i guess thats the reason) which is annoying and can lead to game over for their team

Can we have a task to sort books in Polus?
Or re-adjust the picture-frames so they are level

Thanks for making this great game, and keep adding more hats

Will you ever release this game on Linux in the future? I have a bunch of old computers that could run linux and would love to host a LAN party if this could run on Linux.

Nevermind, I figure out how to get the game to run on Linux.

1. Nvidia Proprietary drivers (stupid GTX1660)
2. Steam with Proton 5.0.2 (older protons should work as well)
3. Rename the game and game folder (the space in the name breaks when importing to Steam)

I had a hard time getting this to work. I finally got success with Manjaro, updating my drivers and installing Proton from steam. Lutris also works as well, but it more work to setup.

Hope this helps any linux gamers out there!

Is it possible to link android and steam accounts?

can you make a version of pc without the hats pls

Already exists,google Among Us free download for pc.I recommend it with MEMU.

How can you get the plague doctor hat in this game

Paying for hats on Android or downloading the PC version with all the hats (some of them disappear with a certain amount of time, like Halloween ones)

On halloween I put the hats on,and never put them down until now and it stayed

I play the game on my S10, however I cannot play it unless I am connected to wifi. It is the only game I have this issue with. I have checked all of my settings and permissions,  but still a no go. Any advice?

Did you know that this game is online?

I do. My question is more about why it won't run using my phones data and only works with wifi.

I understand... it may be because the game consumes enough of the wifi to be able to work properly, and if it were to use it with the phone's own data, there would be no way to play for a long time. Anyway, I think it should be optional

My son is able to play the game without being connected to wifi on his S9 whenever/wherever.

I think this is possible by playing in local mode, so everyone nearby can play

I cant download the windows version for some reason, it says it's not available and on the files available it only shows the android version

yeah, it does that for me to

i paid 5 bux and it is still not letting me download it.

Sorry, that's all I know like I play on Android, but you could look for a tutorial to see if you did everything correctly

your pc has some problem,not the game

Please remove this bug (or no, if it is not a bug)

If you join any room, leave the room and fastly click the button to enter in a Private Room you will back to the room you leaved.

I am playing like for a year and I never saw/heard of something like that.I had a problem that it always disconnected me when I joined any room.

I came to report a very strange bug, which I don't know if it was influenced by a hacker... but well, I was playing normally as a crew member in a match of just one imposter, and out of nowhere I became an imposter, but the waiting time to kill froze at 10 seconds, and I was an imposter only during the game, not at the time of the meeting 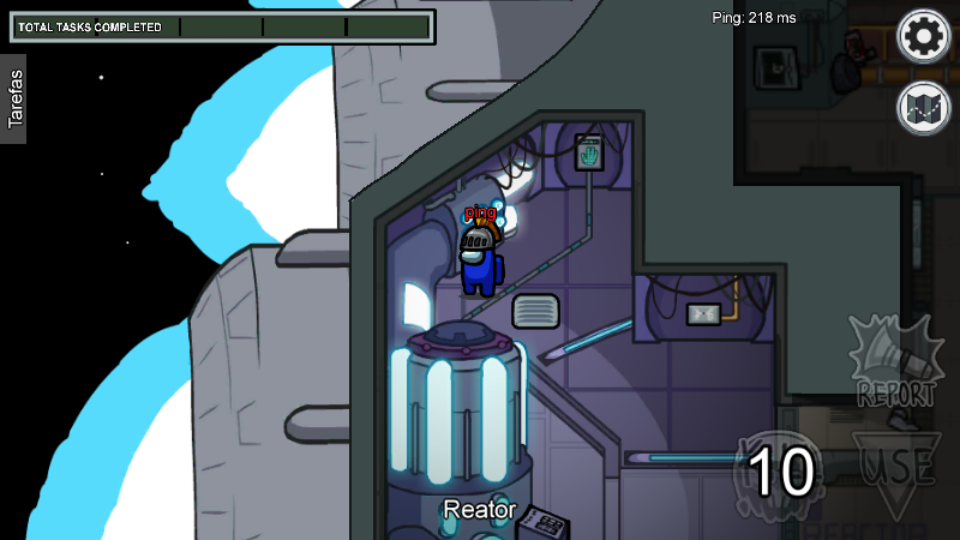 Why is the game free for andriod but costs 5$ for pc/windows?

It's because the PC version has extra features available, like hats and costumes (I don't know if pets too) and on Android you have to pay to have these full features

Then why not make a pc version without the hats and stuff?

There are already some requests for this to be done, just enough the developers may be able to release a free version with limited features like Android and IOS. I think they did it because they still need to have a steady income to keep updating the game (although they said they won't add more maps), but this is something that can be done in the future

search among us free download for pc on a browser and you´ll find soooooooooo many like you said.