First of all, we hit 1 million downloads! Thanks so much for enjoying Among Us enough to download it a million times! It kind of snuck up on us, so this update doesn't have anything in particular to celebrate, but keep your eye out for the next one. :)

More to the point, this update has a bunch of changes, so let's take a look at the big ones.

Voting Notifications Added to Chat
We wanted to make sure that people chatting weren't forgetting to vote, so now there's another indicator of what's going on beneath the chat. 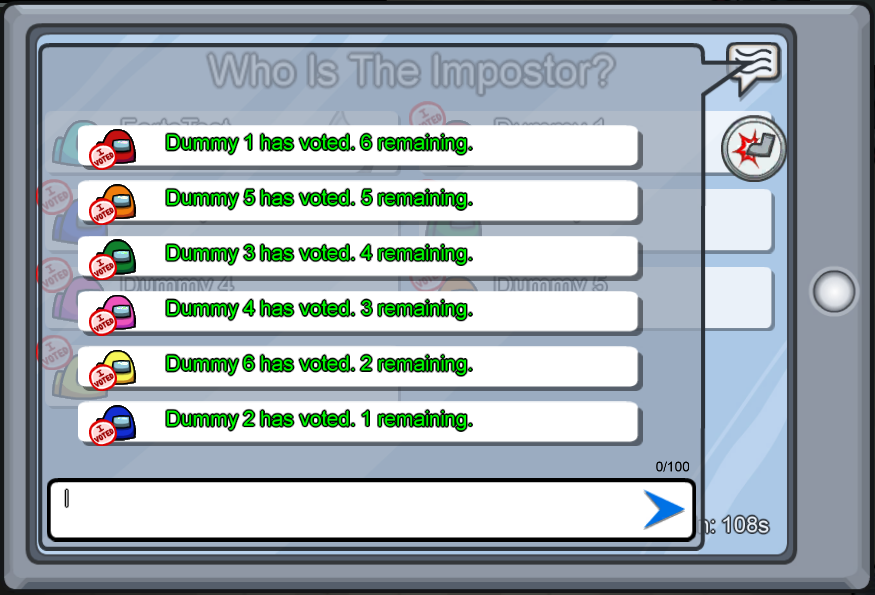 As a game with many younger players, we want to make sure the chat is a safe place. The upgraded filter is still not 100% perfect, but it should catch far more obscenities than before. That said, we've found it can be a bit strong at times, so if you find a polite word or phrase is being censored, let us know. We also plan to add a setting in a future update to turn it off entirely if you want.

Before a game starts, hosts still have full control of kicks and bans. Once the game starts, the kick menu will be available to all alive players. Ghosts cannot vote to kick players because they might vote for impostors. If any three players vote to kick a player, it will happen. Hopefully this  will strike a balance between bad hosts having all the power and kicking players because they aren't getting their way. And good players not having enough power during the game to stop trolls. We still have our eye on this and will keep improving it.

That should be about it. Thanks again for enjoying Among Us so much! We're really excited to keep improving it for you all. And as always, if you wanna hang out in our Discord or hit us up on Twitter, please do!

PS. We have quietly announced that we're working on new two maps. Aemu's Headquarters map is planned to release first, but PuffballsUnited has been streaming work on his planetbase map most weeks.

(Bug) in Mirahq you can glitch out of the walls and you cannot be killed.

I know this has nothing to due with the current update and I know this is kind of mean;

But i have a death idea for the new map;

-A task that requires a crewmate to go outside the building

-And because of this the imposter can sabatogue the door that allows entry and exit, making crewmates stuck outside to die from what ever is deadly out there.

-The imposter has to do this near the door which is pretty risky. And a crewmate has to hack the electrical panel to reopen the door before the time runs out.  (10- 20 seconds?) This will kill the crewmate stuck outside

Thank you for all the awesome updates and awesome work, and thank you for a awesome and fun game! keep up the work.

Ooooh That would be pretty cool.

Just wanted to say I really love this game, enough to where I made my girlfriend download it and we play every day. That's seriously the truth. We very much enjoy how amusing, exciting, and interesting the game is within every match. From the chat between players, to the mischievous decisions and surprising end.

However there are things that we feel would be amazing for the community. The most cared for addition would be a new map and/or maps. The action to select map is there why not have more options. The Skeld is a great map in itself although after days, weeks or months of playing,  it tends to get old. Also character outfits seems to be a want from the community aswell. If I may offer an idea of holiday specials? Limited time outfits for holidays such as Easter bunny, pilgrim, grim reaper, elves or Santa and so on.

The updates are very well done with everything. Censorsy is a tad too strict in some cases but again very well done. I will highly recommend this to friends and family, overall 5 stars. Hope you take my thoughts into account/consideration. Thank you

I really love this game.I hope you can add more like play bot offline or friend list or add friend,so we can practice and improve ourselves.Thank you for making this game i reall really love it guys keep it up

I loved the game but I think its to short and repetive, you should put more maps and let more people inside one server, also the joystick moment its a dificult to use. If you are going to make the game better, I would gladly bus more skins, i already bought the black suit

Bug: Impostors can kill through doors. I was outside electrical door, the door shut and white(who was the impostor) was inside. I was killed anyways even though the door separated us. Just thought you should know as I assume this is not intentional

Hey, thanks for the report! I just released a new update, but I will look into this for the next one!

Hey, I sent this two weeks ago , but I never got a reply so, there's a glitch where you stand in a doorway when an imposter sabotages the doors, you get pushed into the part behind the wall and can only get out when we start discussing. This happened to me in the South Cafeteria door and I was stuck in the wall between Electrical and the Cafeteria, could still move around but not get out, and I could still report things that happen but could not move throughout the rooms to do my tasks. Hopefully you see this and are able to fix this. Thank you.

Does this still happen? It should at least be much harder now since it was improved in version 2019.5.7.

I'm not sure. It was completely random that it happened to me. I'll try and stand in a doorway while I'm imposter and sabotage the doors

Make achievements please and long term goals as well. Doesn't have to be work intensive. You are a small dev team. Just add some stupid shiny colors and maybe a shirt and 2 hats to start off with for each map. Equippable kill animations might be a good future goal as well. Also better end screens for impostors and crewmates. Just long term goals to think about where you want to be a year from now.

Edit: Thanks for the great game too. My friends and I love it to death.

I think there should be a feature to like friend someone in the game,so that you can keep playing with someone that you've made friends with

I say you should add new maps, and/or tasks

I love this game so much! It's such a small simplistic game and it's so addictive, there's also a lot of room for improvement and growth which keeps my expectations for this game very high.

I'd like to suggest a feature where you can add  a player you met as a Friend. Like the players you've met in a game that were really good. To have this separate "Friends" tab where you can join and invite them.

Another thing I'd like to see is the ability to change the amount of imposters while setting up the game in the start hub.

That's all for now and thanks for your time

When I first started playing this game I couldn't put my phone down. Obviously there's still bugs and errors to fix but I know your team is workimg hard at that; (new maps, colors, skins, tasks, etc. There is one request I do have. If you could please make a way to have permanent usernames so that you could play with friends easier that would be great. (A friend list?) Big thanks to the whole team for this game!

I really like this game but its not fun when Cheaters entered and ruin the fun for us. Perharp you can make a Report System and a AntiHack System? Also please add a report option for Teaming If you do make a report system because People are getting friends to play and when one of their friends dies they will tell the other and making the game boring

I really wish there was a free windows version. I charge my phone to 100% to play it all the way down til it nearly dies. If you could find a way to lower the drain rate for android phones or make a free windows version I'd greatly appreciate it. I also have many many suggestions from other similar games I've played that would help you guys maintain a better community and different "game-modes" of Among Us. Keep up the good work! Also, I grew up playing the Henry Stickman series and found out today that you guys created it. Much love to you guys for creating an awesome creative game that has kept me and my friends/brothers intrigued on finding new ways to beat it for years to come.

Or you can download a Mobile Emulator and Play Among Us on It. Would not recommend if you have a terrible PC

Hey, there's a glitch where you stand in a doorway when an imposter sabotages the doors, you get pushed into the part behind the wall and can only get out when we start discussing. This happened to me in the South Cafeteria door and I was stuck in the wall between Electrical and the Cafeteria, could still move around but not get out, and I could still report things that happen but could not move throughout the rooms to do my tasks. Hopefully you see this and are able to fix this. Thank you.

Being able to have a friends list and being able to add them to a game you're in would be really cool.