The Future of Among Us

Hey everyone, PuffballsUnited here! It’s been a very exciting time for us the past few months! We’ve absolutely loved seeing everyone enjoying Among Us! Forte has been working hard to get the servers adjusted to deal with the huge influx of players. Thank you so much for bearing with us through these growing pains. Hopefully we can get started on new content soon! Speaking of new content…

Us devs have had several long discussions about what we want to do with the game. When do we stop working on Among Us 1? What content goes into Among Us 2? The main reason we are shooting for a sequel is because the codebase of Among Us 1 is so outdated and not built to support adding so much new content. However, seeing how many people are enjoying Among Us 1 really makes us want to be able to support the game and take it to the next level. We have decided to cancel Among Us 2 and instead put all our focus into improving Among Us 1. All of the content we had planned for Among Us 2 will instead go into Among Us 1. This is probably the more difficult choice because it means going deep into the core code of the game and reworking several parts of it. We have lots of things planned and we’re excited to bring new content to everyone as you continue to enjoy playing!

Here’s some things that are coming on the horizon:

* Servers. Forte is still working very hard to figure out our server issues. We don’t have an ETA but things should hopefully be getting better and better. This is taking up all development time on his end.

* Colorblind support. It’s something we’ve put off for way too long… We plan on adding other identifiers for players as well as certain color focused tasks (Like wires). This should also open the potential for more colors. In the past we couldn’t add more colors because it became too difficult to tell players apart.

* Friends/Account System. This is something we’ve wanted to do for a long time but just haven’t been able to tackle. For the health of the game going forward we’re going to sink our teeth in and figure it out! This one will definitely take some time.

* A new stage! It is still very early and we have only just begun designing the layout. The theme has been settled on though! The next stage in Among Us is going to be a Henry Stickmin themed location!

We have LOTS of other things planned too, we just need to prioritize and organize all our plans. Stay tuned!

Make a colorblind thing so they can play!  :

Reply
Among us Fan Kid4 hours ago (2 edits) 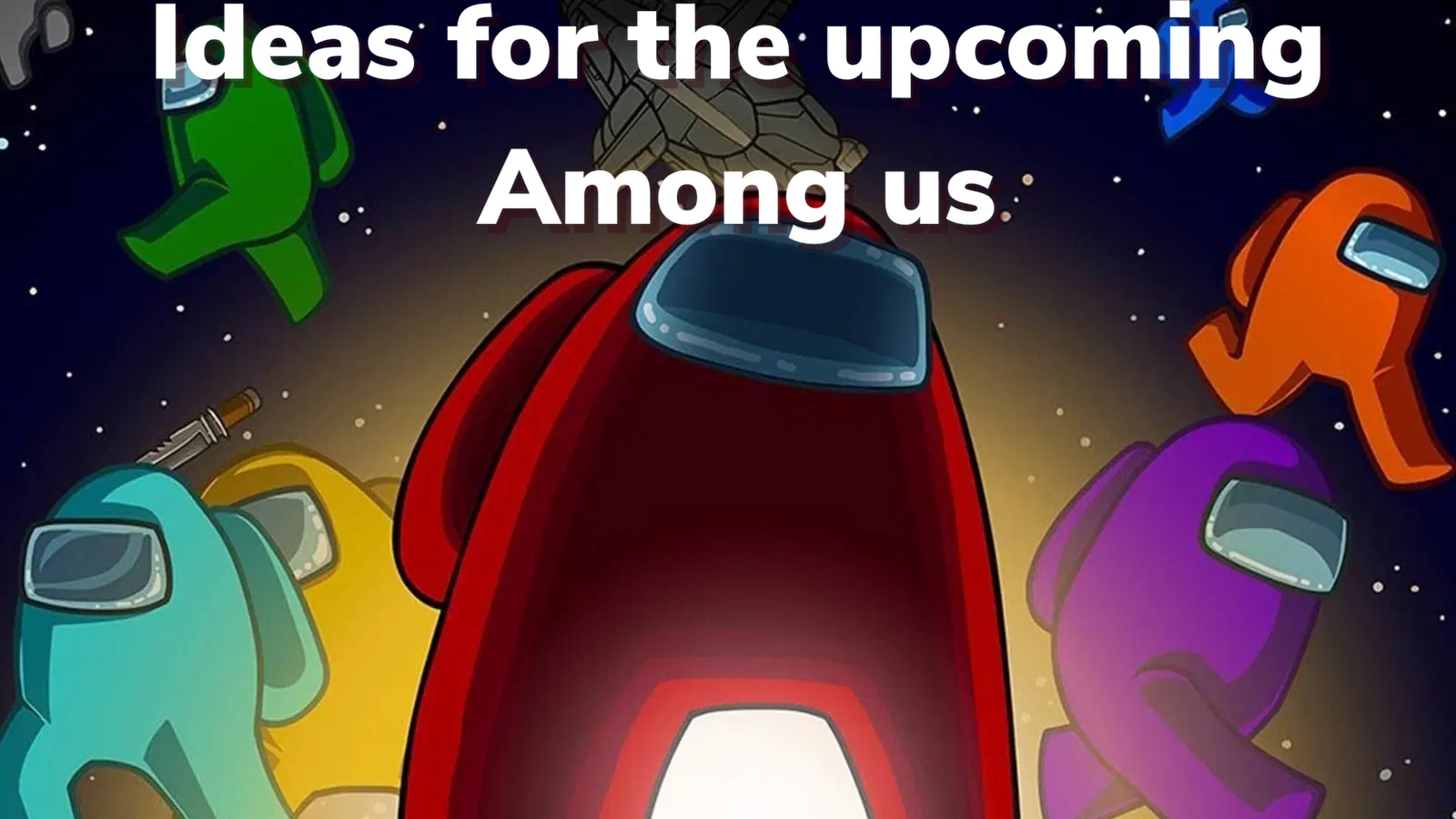 how about you add better graphics and make it 3D in among us 2 and add voiced to the characters.

If imposters win they do a kill animation and when crewmates win they dance.

Make it so there is “Beginner Mode” where you can join beginner servers like if your on that mode you can have no kill cool down, unlimited sabotage time and choose your speed.

Make there a cool down for reporting body’s cause that will be more challenging.

what if you could join partys in the middle of a match, and also what about spectat. 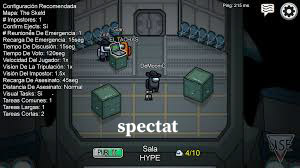 i think its good 9

i think cool game modes to have  would be

Free for all: you have flash lights and can sneak up on people

hide and seek: I think it would be cool to have time limit

party mode: no importer, it's just a group of of people

team death mach: your with a group of people and fight others

custom mode:  create your own rules

if you have any ideas just reply

i have an idea how about a no kill cooldown

I have an idea! How about a new sabotage where you can turn off the engine, then the alarm goes off. Due to the malfunction, the engines teleport everyone there, but there would be a 3-digit code. It would give you 4 numbers to work with, that could be in the code. I you dont do it within 30 seconds, it would give you one of the numbers. You would have 2 minutes to figure it out.

I think it would be cool to have different game modes as a option: 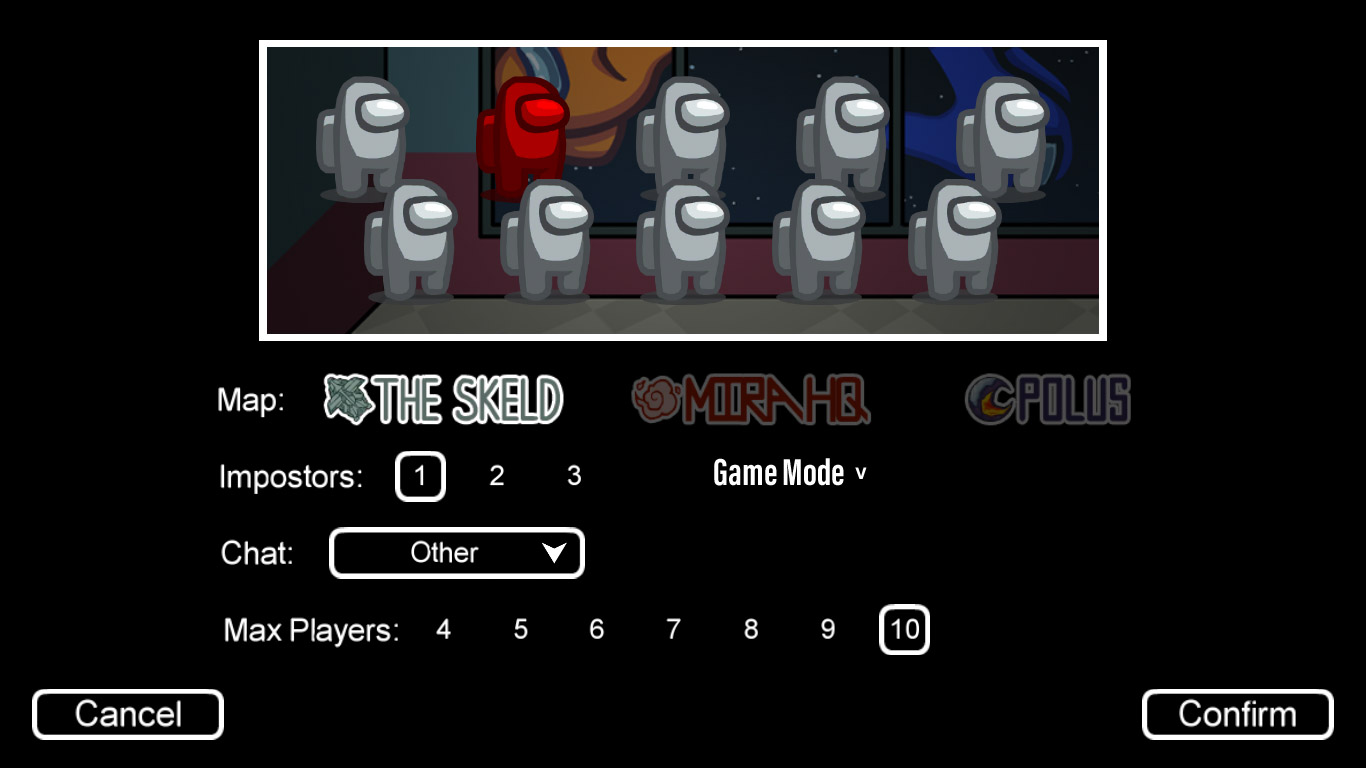 this is cool but

i think having an account system is not a good idea.

having the ability to change your name to anything as many times as you want makes it easier sometimes.

i think we should have accounts, and also i think it would be cool to have nickname.

the game is honestly fine how it is

I have an idea that I have been thinking on for a few weeks.

I think it would be a great idea to add custom map making, now this would also be a whole different game mode chosen by the player themselves.

How I think custom map making would work is allowing the player to go to there own sandbox. They will have a menu of (walls, floors, furniture, and task objects).  Players would be able to make there own spaceship and even put tasks on the ship. Although I do think these custom maps should only be private matchmaking. Just because we wouldn't want people making toxic maps for the public.

That's it for my idea. Thanks!

Please do something about not being able to leave. Cause it's getting annoying when u can't even finish a game for 5 games in a row because there just leaving. You should have a 3 leave strike and should get banned for a day. Please I'm not even having any fun being imposter cause they leave and I win by forfeit. Please fix this I love this game too much

I want to just suggest one thing.

One type of character that its mission is to kill the impostor(s), but cant complete the tasks neither call a meeting (Since it can kill)

I have a couple of proposals that could come in handy for a better gaming experience.

1 That will add more variety of maps, I know that maybe with many maps it would be a bit chaotic, but if you could choose at least 3 a day out of 6, it is an example.

2 it would be nice if they added a voice chat to be more communicated with the other players, this would be one for the crew and another for the imposters so communication would be easier.

4 that the spaceship in which we will travel had a destination and within the route the events of the game would occur, if the impostor (s) do not manage to kill everyone when the ship reaches its destination, automatically lose or lose.

and 5. I think that the most important, that there was some kind of classification or ranking where we could see, for example, how many games won we have as an imposter or for example, how many impostors we have managed to capture, or who is better as an impostor, is only  example.  but I think that with these ideas it would be even more entertaining than it already is.  Please support this comment for developers to see.